So Pokémon Go has taken a hold of the world where it’s available: Australia, New Zealand, Germany, Britain, the United States, Latin America, Japan, and continues to expand world wide. You might be thinking “How is this relevant to me? I’m a business, and too old to be playing Pokémon (and what’s a ‘Pokémon’?)”. Well, Pokémon Go can be relevant as well as beneficial for businesses in a number of ways—as for being too old, this is just a matter of perception!

The value that Pokémon Go has for your business or event is one of pure numbers and is simply too big to ignore. It makes sense to be in on the trend and join in on the viral explosion and popularity of the application and learn how you can engage the potential of real-life wandering Pokémon Go Trainers who are out and about on the streets and around your businesses. Most likely this has been happening since the release of the game without you ever really knowing—until now.

OK, but what is Pokémon Go? Pokémon Go is a Massive Multiplayer Augmented Reality Game (MMARG): it leverages GPS location data to plot your virtual character on top of your real life location. Behind the scenes Pokémon Go is using the Google Maps data to place your in game character—a “Pokémon trainer”—at your GPS location in the real world. What this means is that to play Pokémon Go you have to walk around the real world. This is a stark change to the view that people can have of “gamers” as people that hide from the sun and stay indoors at all costs tied to their respective gaming device.

More details on how the game works are below as well as some ideas for how it can be used to benefit you.

Who can look to leverage the benefits of Pokémon Go players

Food Trucks and Food or Stall Operators for licensed areas

Why – A large number of players want to congregate in areas for specific in-game interaction points called ‘PokéStops’ (further details below on these), the more of these PokéStops in a small area the more lucrative this is for a player catching Pokémon, and flow through to the businesses in or near these areas too

Charities: especially those with walking events / animal rescue and care

Education Centres: Especially Open Days for Schools, Universities and Technical Colleges, as well as “Active Schools” engaging with students to be active

Why – Most major Education Centres are in city or central locations, these usually have densely populated PokéStop zones that players want to interact with

Why – Many of these locations will be present in city centres or populated urban areas, these usually have many in-game PokéStop zones that players want to interact with

Why – Walking certain distances are required to trigger certain items in the game that players really want, as well as many of Open Air Community Space locations have many in-game PokéStops zones that players want to interact with

Why – Some of the higher density PokéStop locations in-game that players want to interact with are located in Central Business Districts and City Centres, if you’re a suburban player sometimes you can find the local in-game environment lacking in exotic items and Pokémon and need to travel; it’s best to travel safe and use a public service than ever try to drive and play at the same time, so highlighting this fact is a fun way of engaging players to travel without the need of one person missing out on the fun

Why – As per the above State Public Transport Providers, sometimes it’s easier or the only option to use a Private Transport Provider instead of a Public one; players pay for the service of being driven to the location they want

Hospitals and other Care Facilities

Why – Many Hospitals are locations for in-game areas that players want to interact with; for people that are unable to leave their beds and walk around it’s just a simple thing you can do to help them should the patients inside be playing

So, what’s the big deal here?

Well, for one Pokémon Go has become HUGE. I mean, really, really big: it’s become one of the largest mobile application viral successes EVER.

To put in perspective just how huge this thing is, consider that not long ago, Pokémon Go surpassed Tinder (the dating application) for the most number of installs on devices, and was hot on the tails of Twitter for daily active users. Pokémon Go has since surpassed Twitter’s daily active users to claim a whopping 8% of all Australian Android Device Users.

The data collated by Similar Web provides us with some valuable insights into Pokémon Go Installs/Downloads, and Active User counts for Android Devices (which on last check was the market share leader in Australia for mobile devices):

From the above, Australian Android App Data based on July 11th 2016 (From Similar Web) Installs is at 15.1%—that’s of ALL ANDROID DEVICES IN AUSTRALIA, which is gigantic considering the ~52% Android device market share in Australia (from January 2016 Data – image below)! All of these people are walking around, using their device to play Pokémon Go: They’re leaving their houses, their workplaces, and wandering around cities and suburbs hunting Pokémon to catch and there are ways that you can entice all that foot traffic to your store, event, or location based on a few ideas we’ll outline here.

Wow, that’s a lot of people, how can it help my business or event?

Accessing the “people power” of Pokémon Go is about engaging with the user base and showing you at least get a bit about the game even if you’re not actively playing it yourself. If you do install it you might discover what all the fuss is about and become a powerful Pokémon trainer in your own right!

Within Pokémon Go there are Virtual Creatures (called Pokémon) that the players (Pokémon Trainers) are trying to catch. These Pokémon are spaced out in the real world (due to the Google Maps and GPS data interaction) and can be tracked down by players who want to capture them and add them to their collection. This means players need to walk around in the real world environment, it can’t be done from just sitting around at home.

Pokéstops: Players that are in range of a Pokéstop are able to interact with it and receive in-game items that help them on their Pokémon Go adventures (aiding in capturing more Pokémon, or battling at Gym’s for virtual fame). These Pokéstops are accessible to interact with again after a 5 minute ‘cooldown’. In dense city locations Pokéstops are much more common and many people will be wandering around these locations or physically present to leverage the rewards available.

Pokéstops and Lure Modules: A “Lure Module” is an in-game usable item which can be placed actively by players on Pokéstops and once placed increases the chance of encountering Pokémon for all players physically present at that Pokéstop location for 30 minutes before needing to reactivated.

Gyms: Players at level 5 or above in the game that are in range of a Gym have the ability to either train at the Gym (being on the same team), or do battle against it (being on an opposing team)—these locations are more sparsely placed as opposed to the Pokéstops. Because of the use of real-life physical locations as part of the Pokémon Go game-world means that everyone playing must physically visit these locations to be in range to access their rewards or features, it means that they’ll have to be physically present. Choosing a an in-game ‘Team’: As a player, your Team choice (only accessible for players level 5 or above) only affects your Gym interactions at this point in Pokémon Go. Team choice for players is definitely a point of pride for many!

Choosing your Team in Pokemon Go can be serious business!

Unfortunately, not all businesses are mapped as either Pokéstops or Gyms; however, you can still look to benefit from the phenomena.

Being across Social Media (Reddit, Twitter, Facebook) you see a lot of great insights into how early adopter businesses are getting onboard with the huge Pokémon Go success and reaping the benefits. The below will show you a few examples to test out to see what could work for your specific business or circumstance.

Highlight that there’s active Pokéstops accessible from your business location 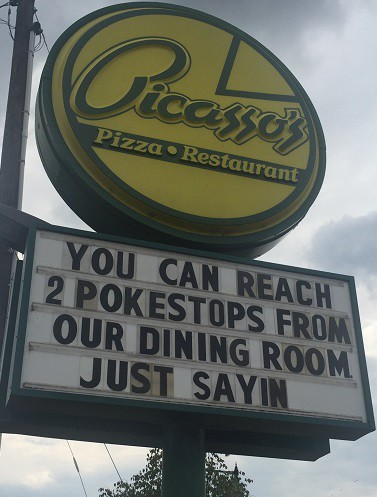 Offer discounts based on Player Level or Player Team: Daily, Weekly, or whatever works best for your business Provide free or discounted items if they’ve used an in-game item called a “Lure” near or on your location so it’s benefiting you (you can check they’re telling the truth!) Lure Parties: Highlight that you’re running “Lures” at your Event or Business (you can set these yourself with a Pokémon Go account and small investment in-game) 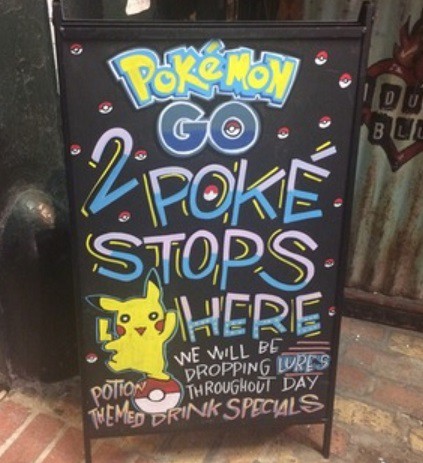 I hope this blog was helpful in explaining how and why Pokémon Go can be a benefit to your business, location, or event. We’re really interested to see what ways you might be leveraging Pokémon Go engagement!

If you see any great ideas online, in person, or have tried your own and found success please comment and let us know. If you have any other ideas or success with engaging with the Pokémon Go community we’re interested to hear about your experiences!

And if you want a business near a PokéStop or Gym to get involved that’s not already on board, send them this blog :)!

If you want to learn more or anything else about creative digital marketing opportunities or solutions, drop us a line.

If you’re already playing, make sure you’re aiming to be the very best Pokémaster you can be! Be safe. Be responsible. And look out for each other!